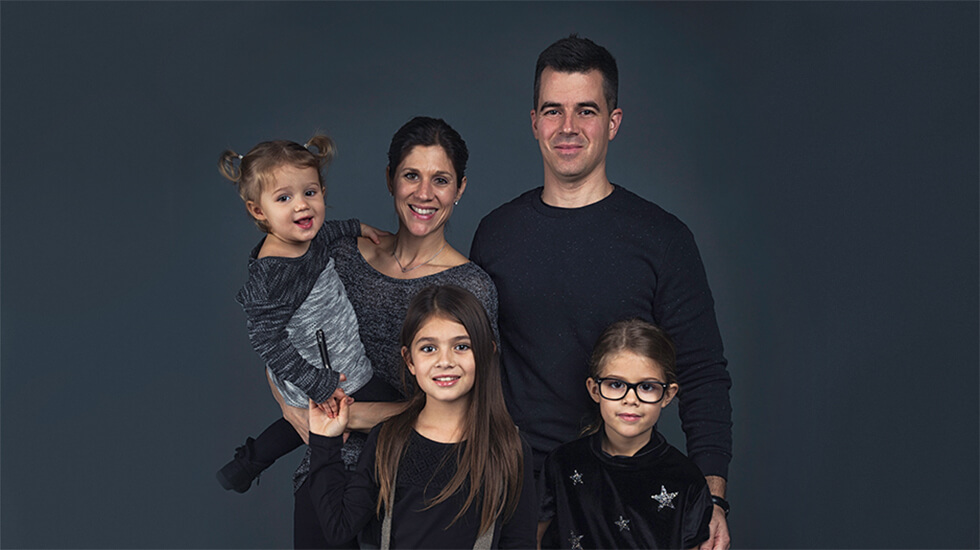 If the love of your life might have an increased risk of breast cancer due to genetics, would you want to know? On the one hand, you might experience relief—or even a degree of peace—if you learn she does not. On the other hand, knowing she does can provide a sense of control over the disease. However, the knowledge of a confirmed genetic risk can also present a series of complex worries and more decisions for the patient: Should I have a preventative mastectomy? What about an oophorectomy? How do I tell my sisters/mother about my results? What about my daughters/granddaughters? Will they have fears they shouldn’t have to carry until they are older?

With recent advancements in testing for genetic mutations in the BRCA1 and BRCA2 genes, more women—along with their partners and families—are facing these complex decisions. Today, we’re sharing the heartfelt reflections of Douglas Feil, NBCF Chief Programs Officer, about his wife Jody and their experiences with genetic breast cancer.

Two cases within the family

When my wife was a senior in high school, her mother was diagnosed with early stage breast cancer. After a lumpectomy and localized radiation, there was nothing to suggest her cancer was atypical or likely to reoccur. My wife remembers not being too phased by the word cancer. Her mom quietly underwent treatment, continued to work, and never missed any of the important milestones. Homecoming, college visits and prom—that’s what my wife remembers.

Less than a year later, her grandmother, an Italian Catholic living in a working class neighborhood of Milwaukee, was diagnosed with ovarian cancer. Found at a later stage and given a poor prognosis (the cancer had spread throughout her small frame), my wife remembers being swept into a rapid current of the unknown. Treatments failed, and her grandmother’s spirited personality began to wane. She died within the year.

Seven years later and shortly after our engagement was announced, my wife received a call from her mother. Her breast cancer had returned. Her doctors were optimistic, but the family began to wonder if this really was just an ordinary case of cancer. Like an echo, reverberating and rippling from just out of view, there seemed to be some sort of nameless root.

Just a year before the family’s first encounter with cancer, unbeknownst to them, scientists discovered that mutations in the BRCA1 and BRCA2 genes significantly increased the risk of breast and ovarian cancers and that these mutations could be passed on to future generations.

Nearly a decade later, my wife’s mother, armed with information and a green light from her insurance company, tested positive for BRCA2 gene mutations. A two-time breast cancer survivor, she would need to decide how she wanted to proceed, whether to have preventative surgeries or just continue her increased screenings and doctor visits in hopes of finding any abnormality early. She would also have to tell the rest of the family. Her sisters and daughters (one being my wife) would also need to be tested. Now, they were also vulnerable.

I work for a breast cancer charity, so you might think I’d be the first in line advocating for my wife to be tested. I look at the facts all day. I educate others about the importance of early detection. But like thousands of people in the face of the unknown, my wife and I were scared. We now have three daughters, and cancer’s increased risk seemed to roll like an endless wave. This family history could be passed on to them, and the reality of preventative surgeries could be theirs as well.

As with so many other Americans, it was Angelina Jolie’s brave op-ed piece in The New York Times that compelled us to find out the truth. My wife made an appointment just a few weeks after the story was published, and I’ll never forget the feeling of waiting to hear the news. I was sitting at my desk when she called with the results. She did not have any known genetic mutations. The tears welled, we both cried and the relief surged like a thousand breakers.

Each year, scientists are discovering new mutations, and though I live in hope, I never feel like the concern completely subsides. I think that’s why it’s so important for all women (and men) to know your family history, to have an open dialogue with your doctors, and to advocate not only for yourself, but also for your loved ones.

The NBCF team shares Doug’s relief that Jody, our very own Wellness Specialist, doesn’t carry the genetic mutation that plagued her mother—and likely her grandmother. His three adorable daughters will not have reasons to expect a higher than typical risk of breast cancer. Still, we know Doug will encourage all of the women in his life to continue to be proactive about early detection and personal breast health. Thank you Doug and Jody for sharing your family story.

(A version of this story was originally published on Media Planet.)

Why I Never Dreaded Chemo